Elder Larry Grant is of mixed Chinese and Musqueam ancestry. Born on a hop field as a premature baby in Agassiz, B.C., Grant was raised in Musqueam traditional territory. After retiring as a longshoreman, Grant enrolled in the First Nations Language Program at the University of British Columbia to reconnect with his mother’s ancestral language, hən’q’əmin’əm’. Today he serves the Musqueam Nation as the Language and Culture Consultant. 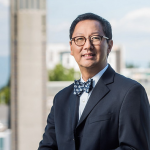 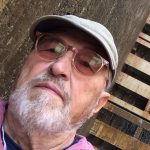 Fred Wah is a Canadian poet, novelist, scholar and Canada’s former Parliamentary Poet Laureate. In 2013 he was made an Officer in the Order of Canada. Wah completed his BA at UBC, where he studied English literature and music, followed by an MA in literature and linguistics at the University of Buffalo.  Fred Wah’s book Diamond Grill serves up the story of his hyphenated identity growing up in his father’s Chinese-Canadian café during the 50’s in Nelson. Identity has been a major theme in his lengthy publishing history. Of interest to this particular occasion, he recently collaborated on the interactive website High Muck a Muck: Playing Chinese, An Interactive Poem, available online. He divides his time between Vancouver and the Kootenays.

Professor Lesley Cormack is Deputy Vice-Chancellor and Principal of UBC’s Okanagan campus in Kelowna, BC. Professor Cormack joined UBC in July 2020 from the University of Alberta where she served as Dean of the Faculty of Arts from 2010 to 2020. A historian of early modern science, Professor Cormack specializes in geography and mathematics of 16th century England. She earned both her Ph.D. and Master of Arts from the University of Toronto where she studied history and philosophy of science and technology.

Stories of Care is a project aimed at capturing and amplifying the stories of Filipino care workers, and the impact of the pandemic on them — stories of employment, unemployment, family, grief, healing, community and resilience. This project is built on individual stories, relationships and trust. The work is centred on acts of self-care as parts of community care and the ever-growing tension between advocating and being grateful for what they have.

Jennifer Chan (she/her) is a second-generation Chinese-Canadian, born and raised in Tkaranto (colonially known as Toronto) Jenn works as a designer, researcher, facilitator and coach.

Ollie Dela Cruz (she/her) is Filipina, born in the Philippines and came to Canada in 2008 under the LCP (Live-in Caregiver Program). As a Midwife by profession and Member of Integrated Midwife association of the Philippines, she has worked in a various hospital and health centers, promoting health and well-being of everyone in the marginalized community.

Provost and Vice-President Academic, Office of the