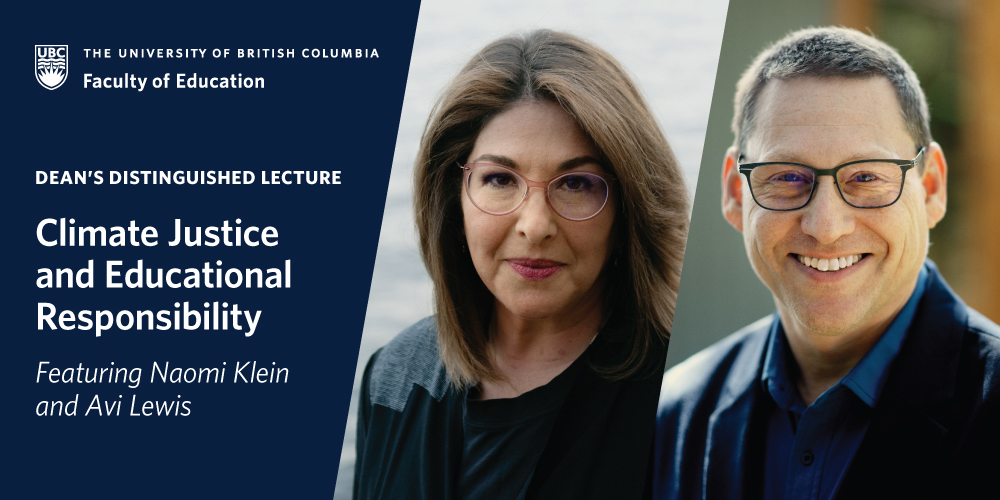 The evidence of climate change is irrefutable. What is less apparent is how different groups—rich and poor, Indigenous and non-Indigenous, youth and elders—are affected by climate change and related risks, such as extreme weather events, floods, and wildfires.

How can we bring together educators, activists, policy makers, Indigenous communities and elders, scholars and frontline communities to ensure we are all working towards environmental justice? What role does education play in supporting and preparing youth to participate in and address the crisis?

Following the distinguished lecture, the Association of Canadian Deans of Education will launch its Accord on Education for a Sustainable Future, a document that highlights the role of education in preparing for the crisis that is on our doorstep.

Naomi Klein is an award-winning journalist, columnist, and international bestselling author of eight books, including No Logo, The Shock Doctrine, This Changes Everything, No Is Not Enough and On Fire, which have been translated into over 35 languages. Her most recent book is How to Change Everything: The Young Human’s Guide to Protecting the Planet and Each Other. She is Senior Correspondent for The Intercept and an inaugural Marielle Franco fellow of the Social Justice Initiative Portal Project at the University of Chicago. In 2018, she was named the inaugural Gloria Steinem Endowed Chair in Media, Culture and Feminist Studies at Rutgers University, and is now Honorary Professor of Media and Climate at Rutgers. In September 2021, she joined the University of British Columbia in the Department of Geography as UBC Professor of Climate Justice (tenured) and is the founding co-director of the UBC Centre for Climate Justice.

Avi Lewis is a documentary filmmaker, journalist, and educator. His 25-year journalism career has spanned directing and producing award-winning theatrically-released documentaries, The Take (2004) and This Changes Everything (2015), to hosting and reporting for TV networks worldwide including Canada’s City TV, the CBC, UK’s Channel 4 and Al Jazeera English. In 2017, he co-founded, and was Strategic Director of, The Leap—a grassroots climate organization launched to upend our collective response to the crises of climate, inequality and racism. From 2018-2021 he was a lecturer in Journalism and Media Studies at Rutgers University. In 2021’s Federal Election, Avi was the NDP candidate in the West Vancouver–Sunshine Coast–Sea-to-Sky riding and is currently an Associate Professor in the Geography Department in the Faculty of Arts at UBC.