Join us for a series of artist talks, panel conversations and keynote presentations throughout the months of May and June.

Drop by the University Theatre on Wednesday, June 15 between 12-1 pm. 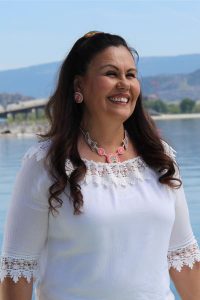 Tracey Kim Bonneau is a member of the Syilx Nation, born and raised in the unceded traditional territory of her ancestors the Syilx-Okanagan. Tracey is a veteran writer and producer, who has achieved recognition and awards from The Canadian Association of Broadcasters, American Indian Film Institute, BC Association of Broadcasters and BC Motion Picture Arts & Sciences Foundation of British Columbia (Leo Awards).

In 2018, Tracey joined the IM4 Lab and serves as a Matriarch with the IM4. The IM4 Lab offers free workshops to provide an accessible training forum for Indigenous peoples. IM4 is dedicated to Indigenizing VR/AR/360 by enabling communities to find effective ways to incorporate these technologies into educational, cultural, language, artistic, and commercial applications.

Aside from her art career, Tracey is employed by a non-profit organization as the Manager of Arts Culture and Adult Higher Learning at En’owkin Centre located in Penticton.