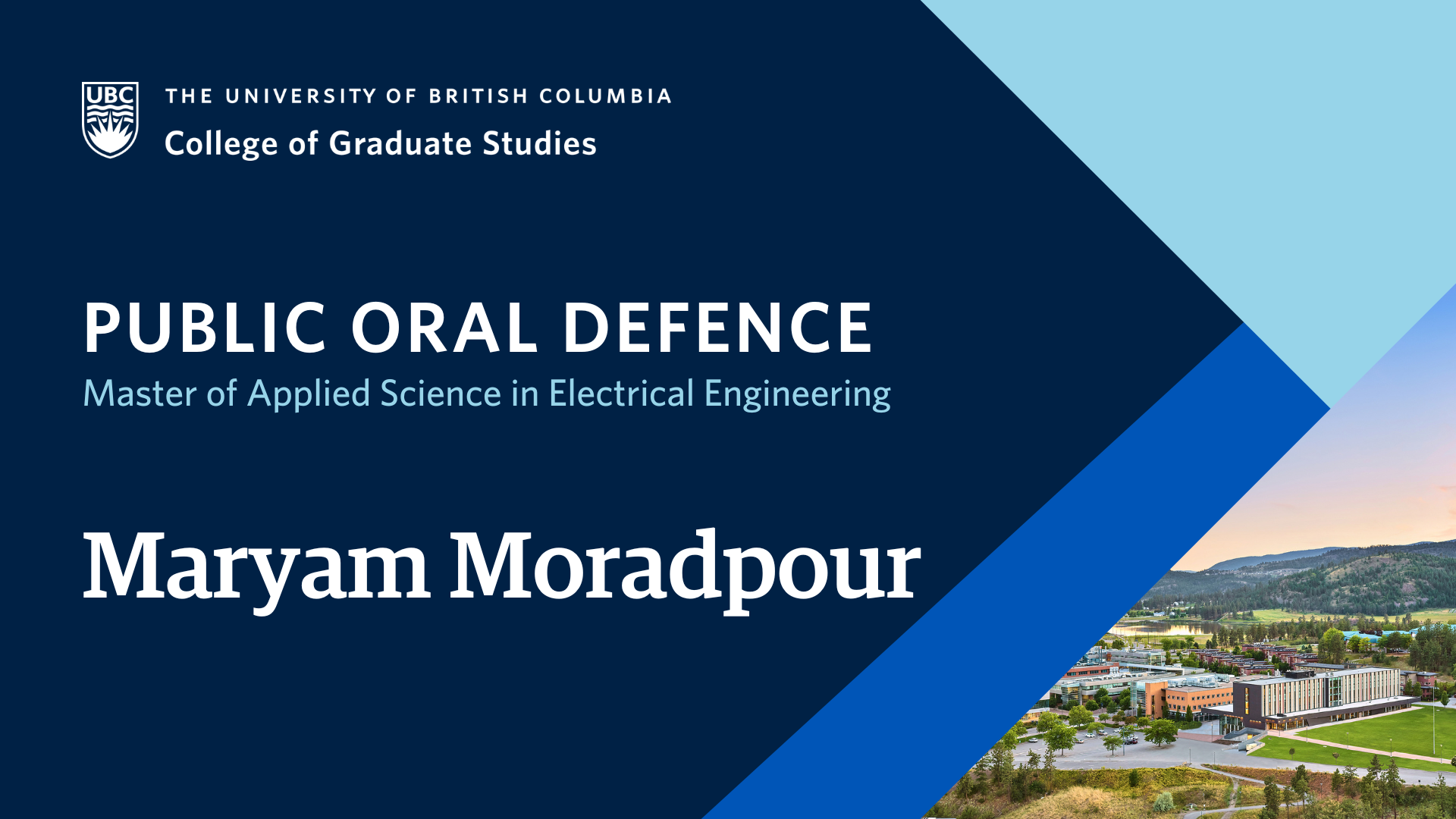 Maryam Moradpour, supervised by Dr. Mohammad Zarifi, will defend their thesis titled “Towards Organic Microwave Resonators Utilizing PEDOT:PSS Conducting Polymer” in partial fulfillment of the requirements for the degree of Master of Applied Science in Electrical Engineering.

An abstract for Maryam’s thesis is included below.

If you would like to attend this virtual defence please contact the supervisor at mohammad.zarifi@ubc.ca to receive a zoom link.

Electronic waste (e-waste) has been rapidly growing with the fusion of the Internet of Things (IoT), and 5/6th-generation of wireless technologies. Metals account for a substantial proportion of the e-waste, which are used in the realization of electronics, including antennas, RFID, and resonators. However, conventional metal-based implementations have posed challenges to satisfy the requirements of modern emerging technologies in terms of cost, weight, eco-friendliness, and compatibility with flexible structures. Tackling these challenges requires an interdisciplinary solution to address the limitations of metal-based electronics while offering comparable mechanical and electrical robustness. The aim of this thesis is to develop planar microwave structures that are sustainable, affordable, and compatible with flexible and wearable technologies.

This thesis introduced split-ring resonators based on a conducting polymer referred to as organic microwave resonators (OMRs), where the metallic microstrip lines were replaced by an organic conducting polymer, called PEDOT:PSS. The geometry and dimensions of the OMR structures were engineered to achieve microwave components operating at various frequencies ranging from 1 GHz to 5 GHz with a desired resonant amplitude. The OMRs were also investigated in electromagnetically coupled microwave structures by implementing two SRRs which resulted in a profound resonant amplitude and quality factor compared to a single SRR. Additionally, the performance of OMRs was validated for microwave sensing of materials in solid and gas states, which showed changes in their resonant response regarding changes in dielectric properties in their close environment. The performance of OMRs was studied in exposure to hazardous gas species where the PEDOT:PSS film acts as an embedded interface layer and translates its conductivity changes to microwave response change. The proposed OMR enabled ammonia sensing and demonstrated a sensitivity of 9.4 mdB in the range of 5 ppm to 40 ppm. Furthermore, the resonator showed a negligible change in exposure to various interferant gases (acetone, ethanol, isopropyl alcohol, and methanol) which indicates the selectivity of the OMR. The application of OMRs was extended to relative humidity detection by electromagnetically coupling a pair of OMRs and exposing them to water vapor. The fabricated device resulted in a sensitivity of 28 mdB/RH in its resonant amplitude and 300 kHz/RH in its resonant frequency for variant relative humidity levels from 3% to 90%. The proposed OMRs have demonstrated a relatively low-quality factor with respect to their metal-based counterparts, which consequently results in a lower-resolution device in sensing applications. To address this issue and enhance the quality factor of the response, the OMR was integrated with an active feedback system consisting of a low-noise amplifier and a phase shifter. This method not only demonstrated the capability of OMRs integrated with other microwave components but also resulted in a continuously tunable quality factor from 1.5 to 600, a comparable quality factor with their metal-based counterparts. The potential of the proposed active OMR in microwave sensing was studied in exposure to relative humidity, which showed a change of 106 kHz/RH in the range of 3% to 80%. The proposed technology provided a roadmap for the development of high-frequency organic electronics to shape future technologies in various applications, including wireless sensing, environmental monitoring, and wearable technologies.