POSTPONED – Unworlding: An Aesthetics of Collapse 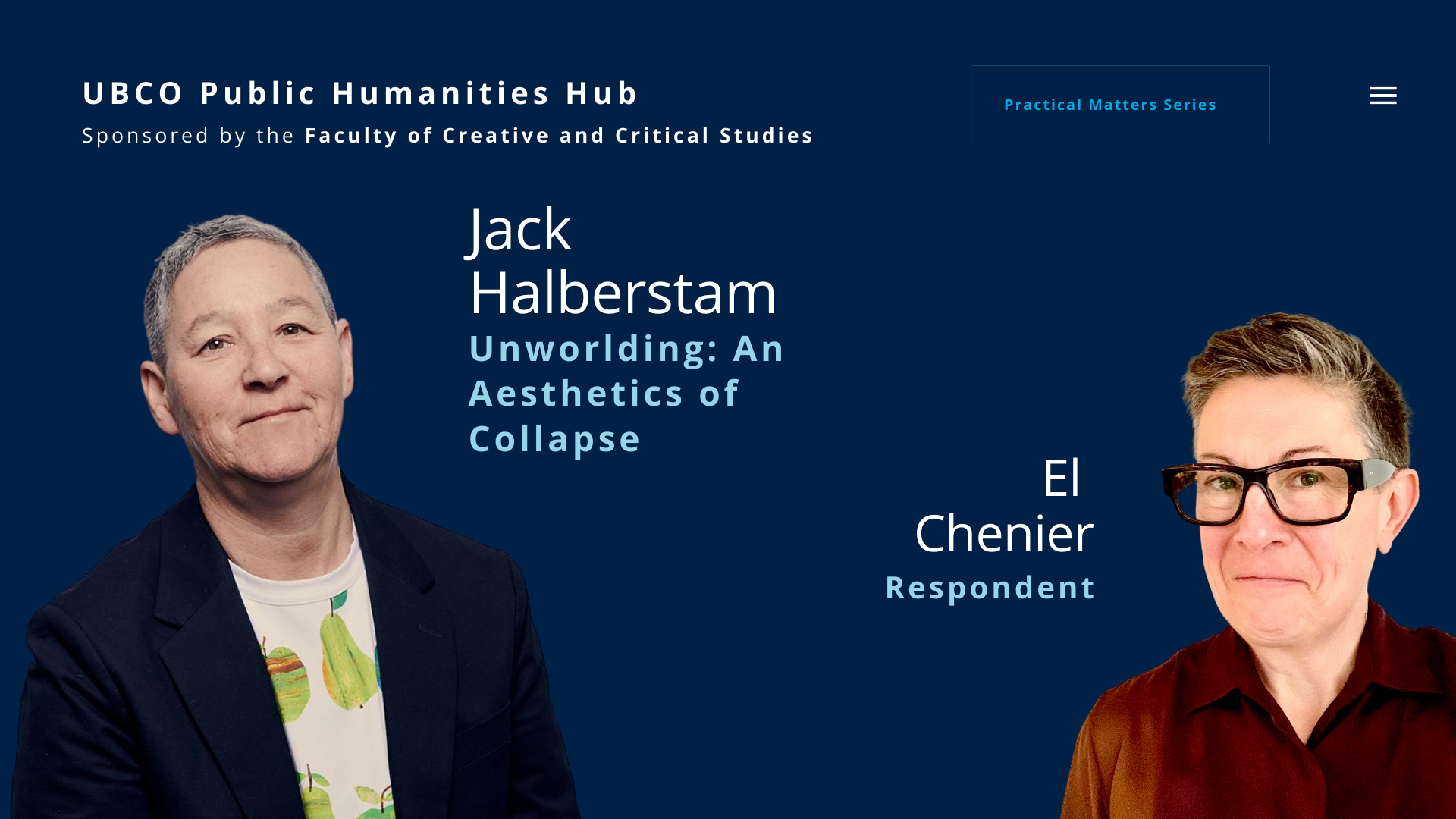 Do to unforeseen circumstances, please note this public talk is being postponed until fall 2022.

The Public Humanities Hub Okanagan and the Faculty of Creative and Critical Studies are pleased to present this public talk with Jack Halberstam and respondent, El Chenier.

In this talk, Halberstam will talk about his idea of “unknowing” and will discuss a way to know the world differently, to change our ideology or worldview, around what we value.

World presumes a totality of things, a form of being that exists through the sorting of subjects from objects, objects from things, and things from unseen forces.

And while “world,” and “life” seem to offer vectors for utopian thinking, these totalizing concepts have also been predicated upon anti-blackness and from the elevation of the human above all other forms of life.

Rather than holding out for new worlds, this lecture begins with the premise that we can only proceed by way of unworlding, in which concepts such as the human, subject, object, animal, vegetative are tipped out of their hierarchical formations and disordered in meaning and in their relations to one another.

After the talk, we will host a small reception in ADM 115.

Jack Halberstam is Professor of Gender Studies and English at Columbia University. Halberstam is the author of seven books including: Skin Shows: Gothic Horror and the Technology of Monsters (Duke UP, 1995), Female Masculinity (Duke UP, 1998), In A Queer Time and Place (NYU Press, 2005), The Queer Art of Failure (Duke UP, 2011), Gaga Feminism: Sex, Gender, and the End of Normal (Beacon Press, 2012) and, a short book titled Trans*: A Quick and Quirky Account of Gender Variance (University of California Press).  Halberstam’s latest book, 2020 from Duke UP is titled Wild Things: The Disorder of Desire. Places Journal awarded Halberstam its Arcus/Places Prize in 2018 for innovative public scholarship on the relationship between gender, sexuality and the built environment. Halberstam  is now finishing a second volume on wildness titled: Unworlding: An Aesthetics of Collapse. Halberstam was recently the subject of a short film titled “So We Moved” by Adam Pendleton.

El Chenier (they/them) is a professor and oral historian in the Department of History at Simon Fraser University whose teaching and research focuses on the history of sexuality in modern Canada and the United States, and the digital humanities. Their award-winning article “Love-Politics: Lesbian Wedding Practices in Canada and the United States from the 1920s to the 1970s” was published in the Journal of the History of Sexuality. They are also the founder of the Archives of Lesbian Oral Testimony, a unique online collection of oral interviews housed on SFU’s Special Collections, and author of Radical Inclusion: Equity and Diversity Among Female Faculty at Simon Fraser University (2019) .