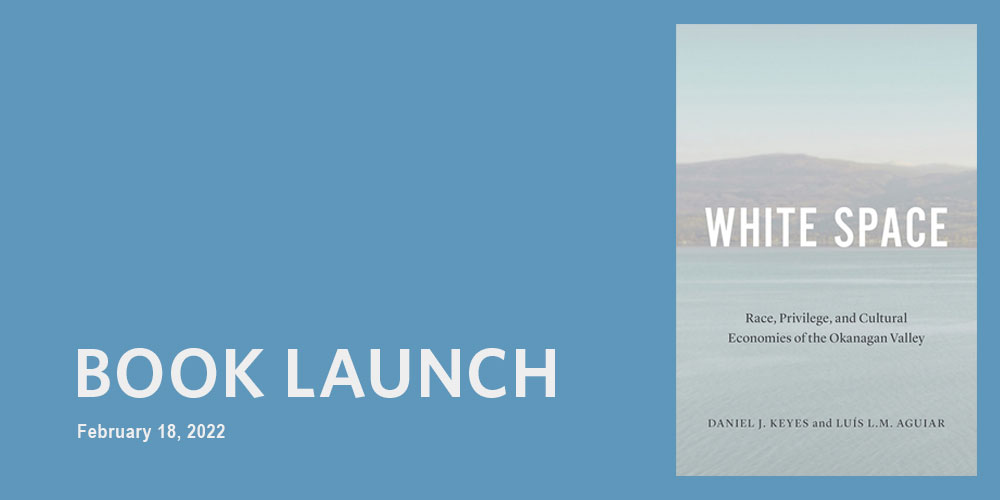 The Department of English and Cultural Studies is please to host the launch of a new book edited by Daniel Keyes and Luis Aguiar. White Space, Race, Privilege, and Cultural Economies of the Okanagan Valley, published by UBC Press, was released in the fall of 2021.

Much attention has been paid to the changing culture and construction of the Canadian metropolis, but how are the workings of whiteness manifested in the rural-urban spaces?  White Space analyzes the dominance of whiteness in the Okanagan Valley of British Columbia to expose how this racial notion continues to sustain forms of settler privilege.

Daniel Keyes is an associate professor in the department of English and Cultural Studies at UBCO, and was the founding coordinator of its Cultural Studies program. Along with a variety of book chapters, he has contributed articles to Theatre Research in Canada/Recherches théâtrales au Canada and Home Cultures: The Journal of Architecture, Design and Domestic Space.

Luis L.M. Aguiar is an associate professor of sociology in the Irving K. Barber Faculty of Arts and Social Sciences at UBCO. He is co-editor, with Andrew Herod, of The Dirty Work of Neoliberalism: Cleaners in the Global Economy and, with Christopher J. Schneider, of Researching amongst the Elites: Challenges and Opportunities in Studying Up.