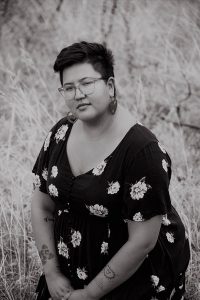 The Indigenous Art Intensive features a series of world-renowned speakers throughout the months of may and June. Join us for a series of artist talks, panel conversations and keynote presentations.

The talk will feature Madeline Terbasket (they/them), a two-spirit Syilx, Ho-Chunk, Anishinaabe performing artist that explores themes of cultural identity and mental health in their work.

Madeline began making films as a teenager in their home territory of the Similkameen Valley in the South Okanagan. They attended six summer sessions at the Gulf Island Film and Television School. Madeline was in the Acting for Stage and Screen program at Capilano University. They discovered a passion for clowning and stand-up. They express their comedy by telling traditional Okanagan coyote stories.